Erfurt – the capital of the Free State of Thuringia

Easy to reach from the Weimarer Land

Erfurt is a vibrant city that arouses curiosity and is both large and small at the same time. The city centre is characterised by numerous historic buildings, winding alleys and beautiful squares along the arms of the Gera river. In Erfurt, history and modernity meet – medieval culture and contemporary art.

The Kunsthalle on Erfurt’s Fischmarkt with its newly restored Renaissance facade has become a nationally recognised address for contemporary visual art. Here, the new, unusual and sometimes disturbing aspects of contemporary art can be seen, as the exhibition programme constantly reflects and rearranges the works of the artists.

This only largely preserved Baroque city fortress in Central Europe on the site of a former Benedictine monastery dates back to the Electorate of Mainz’s rule in Erfurt and is a reflection of European fortress architecture. For centuries, it has shaped the cityscape of Thuringia’s capital. Star-shaped, it was considered the most modern fortification of the time and impregnable. The mysterious listening passages of the fortress can be visited on a guided tour. In the new permanent exhibition “The Petersberg – an exciting journey through time” in the Kommandantenhaus, visitors of all ages can experience the citadel’s eventful history interactively.

One of the landmarks of the city of Erfurt is the Krämerbrücke, the longest continuously built and inhabited bridge in Europe. The Krämerbrücke was first built of wood and then of stone in 1325. Originally, the 120 m long Krämerbrücke was built with 62 narrow houses, which were later consolidated to 32 houses. Of the two former bridgehead churches at either end of the bridge, the eastern Ägidienkirche still exists today (impressive tower view, Tue-Sun 11am-5pm).

The Old Synagogue in Waagegasse is one of the very few surviving medieval synagogues and is the oldest synagogue in Europe preserved up to the roof. The oldest documented building section can be dated around 1100. The fate of one of the most important Jewish communities of the Middle Ages is recreated here in a very vivid and modern way.
The Old Synagogue in Erfurt presents evidence of medieval Jewish culture in Erfurt. The “Erfurt Treasure”, a Gothic treasure find from the 13th/14th century recovered in 1998 in the immediate vicinity of the synagogue, is exhibited in the cellar. It is unique in the world in its type and scope with 3,141 silver coins, 14 silver ingots, more than 700 Gothic gold and silversmith works as well as the Jewish wedding ring.

In the former ballroom of the monument, dating from the late 19th century, the Erfurt Hebrew manuscripts from the 12th-14th centuries bear witness to the intellectual heyday of Erfurt’s first Jewish community.
A Jewish ritual bath (mikveh) was found near the Old Synagogue in summer 2007, which has been restored and completes the museum visit.

The egapark Erfurt is the most important garden monument of the 1960s in Germany and is one of the most important testimonies to the garden architecture of that time. It extends over 36 hectares and ensures that guests forget about time. An innovative highlight – the Danakil, a unique desert and jungle house, unites opposing worlds and houses exotic plant and animal species. Incidentally, this “Thuringian Garden” was the venue for the 2021 Federal Garden Show. In addition, the 35,000-square-metre play and adventure world for children and a sophisticated programme of events promise eventful hours.

The attractions at egapark Erfurt include:

Places of interest in Erfurt

Art Gallery at the Fish Market 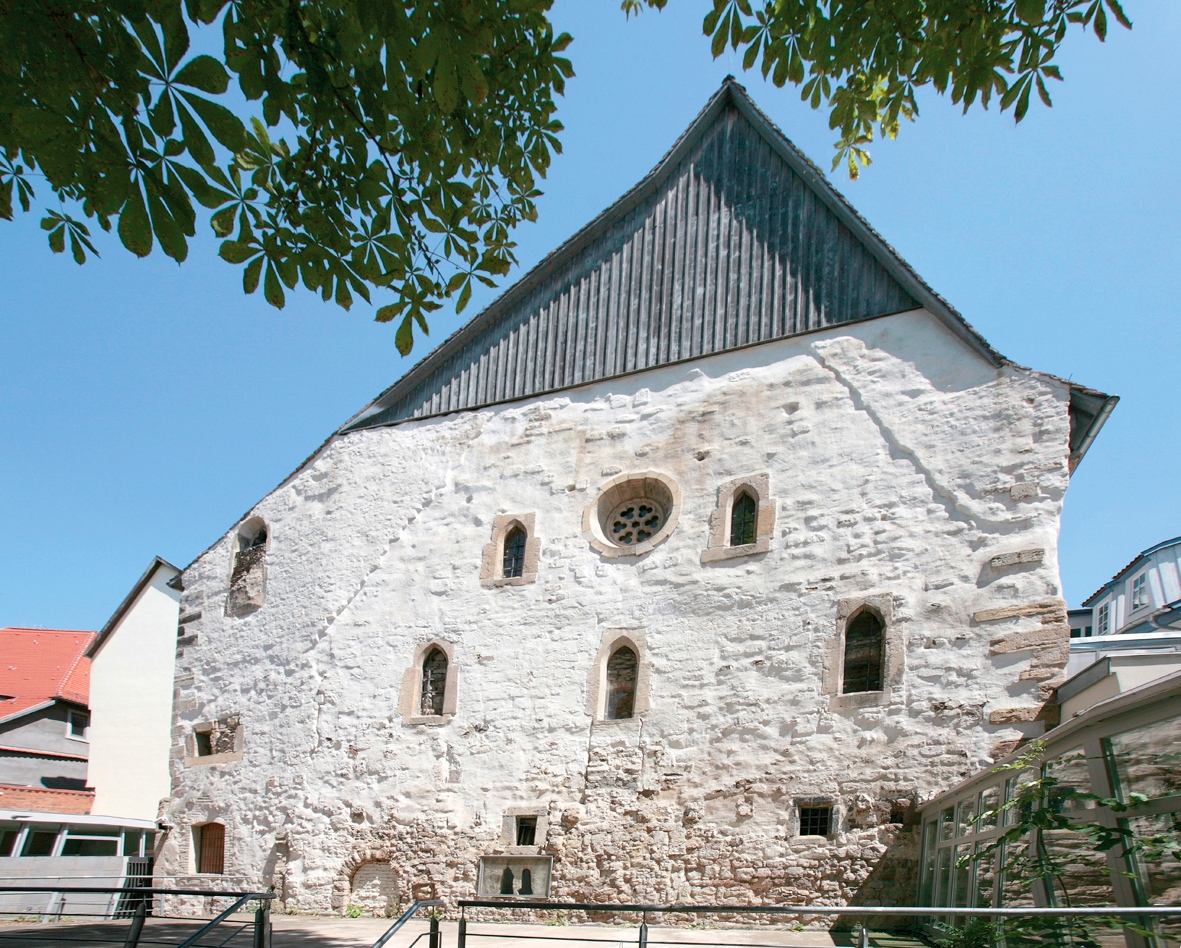 < to the overview of all cities